Thanks to Surf Taco, Thomas and I had the opportunity to attend Sea Hear Now over the weekend. Sea Hear Now is a music, art, and surfing festival in Asbury Park NJ. Let’s just say it is NACHO average weekend at the Jersey Shore! I am going to recap the event and share some tips incase you decide to attend the festival next year.

Please note: This is my honest review, based on my experience at the festival.

Tip 1: Get your tickets when they go on sale! Sea Hear Now tickets sell out FAST. Thomas and I were gifted tickets to this event.

Tip 2: Book a place to stay airbnb/hotel early. Hotels and Airbnbs sell out FAST during festival weekend and prices go WAY up. I definitely suggest looking into a place as soon as you know you are attending the festival.

Thomas and I stayed in Belmar from Friday to Sunday at a friend’s house. It was a very busy week, so we packed quickly and headed out.

Tip 3: (Packing Tip) Bring a portable cell phone charger. I left mine at home and had to run to Marshall’s to pick one up! Remember a hat/sunglasses/sunscreen. It was super windy, so sunglasses instead of a hat might be the way to go. Either way, the sun was strong and protecting yourself from the sun is SO important.

Tip 4: Pack light. Bring a small bag/no bag. There is a baggage rule, and large bags are not permitted at the festival. This will also move you through the security point faster. If you bring a reusable water bottle, you can get FREE water at the hydration stations! 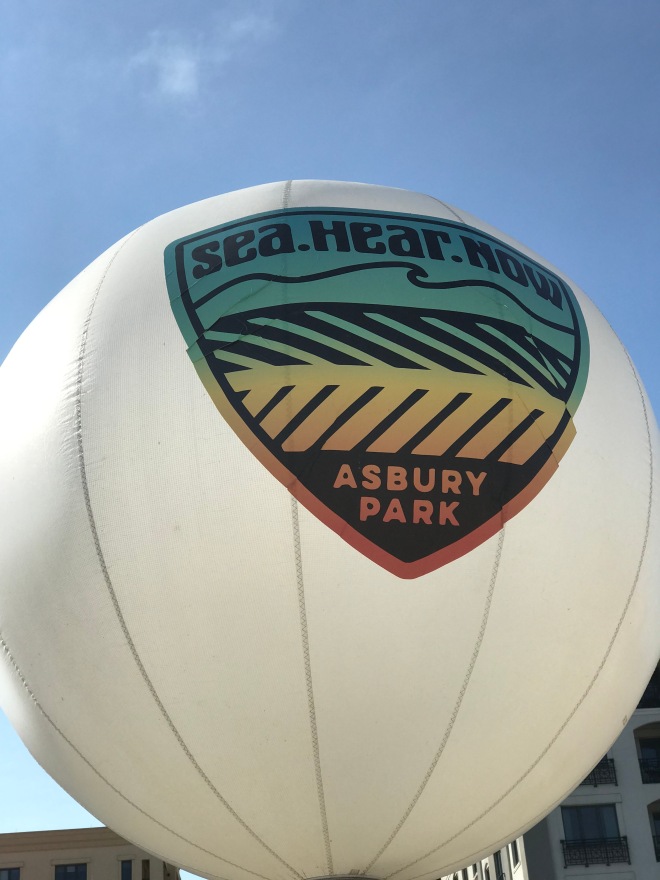 At around 1 pm on Saturday, we headed to day one of the festival. The festival takes place over parking lots, a park, and the beach. There are 3 stages with different musicians at different times. At first it seems like there is SO much to see, but you will quickly realize the size of the festival is not overwhelming.

Thomas and I decided to grab a drink first. There are multiple bars to purchase drinks from or cocktails can be purchased at the vendors stands. Thomas and I waited in line for margaritas at the Don Julio stand. I would like to say I had a pleasant experience here, but I did not. (Gotta be honest with ya’ll!) The bartender double carded me, even after I waited in a long line for an over 21 festival wristband. The margarita (which was not even a margarita.. it was orange juice and tequila) cost me $15 or so. I expect cocktails to be expensive at these things, but I also did not expect that negative experience. Let’s just say I did not return back to that stand.

Thomas and I walked around the festival, viewed the shaper’s alley, and listened to some bands. The actor from Stranger Things played with his band at the park! They were great.

I found Shaper’s Alley very interesting! These shapers make surfboards… how rad is that? Thomas actually purchased his last board from a local NJ board shaper. It is his favorite!

We decided to try some lunch from one of the many food vendors.

I went with a classic chicken gyro. It was very tasty, and the staff was friendly. Thomas decided on a pulled chicken sandwich.

We found some friends, Bridget and Dylan, and we hung out for a while. It was a chill time.  Ps. Do you like Thomas hat? I got it for him and I think it fits him well 🙂 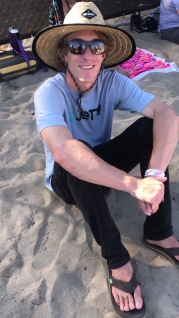 We grabbed another drink at the bar. This time, I keep it simple and went with a vodka club. Let’s just say I did not opt for the “commemorative Sea Hear Now cup for an extra $6,” which lead to recieving a very small plastic cup and a not so happy bartender… and another $15 cocktail. I could not seem to win on Saturday…this was my second at last drink purchase at the festival.

We had some time before Joan Jett, so we watched the surf competition. It was very cool! Ben Gravyy is our favorite NJ surfer and he did great.

At 5 pm or so, Joan Jett and the Blackhearts took the festival Surf Stage… SHE’S SUCH A BAD ASS!  From “I love Rock n Roll” to “Cherry Bomb,” she played the classics and crushed them all!  I hope I am 1/4 as cool as she is one day.

After Joan Jett, we were still hungry and needed a break from the large festival crowd. We walked the Asbury Park Boardwalk and grabbed some dinner and ice creams.

As the sunset, it was time for the Lumineers to take the Surf stage! I am a huge fan of the Lumineers! I love their music and overall vibe. Everyone was singing and dancing along. It was a great time.

Tip 4: Bring a sweatshirt! It did get colder at night as the ocean breeze came off the ocean and the sun set in the sky. I really could have used a sweatshirt at night.

The über drive back cost $60, so we decided to try to walk back. We made it, but we were exhausted.

We woke up on Sunday, headed to iHop for breakfast, and ready for another day by the beach.

We checked out some of the festival art, walked around, and explored some vendors:

It was a gorgeous day on the beach! 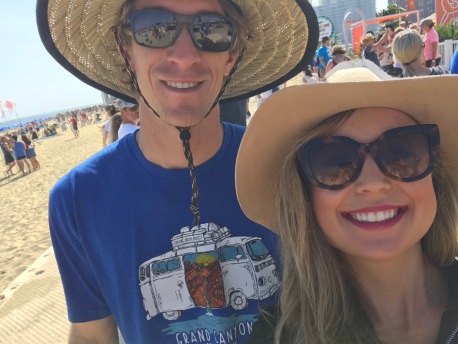 We decided to split a festival nachos order from Surf Taco. This was by far the best buy and best food option at the festival! Delicious!

There were few waves, but we watched the surfers and enjoyed the sunshine. It was another nice day.

Overall, the music was great at Sea Hear Now. I truly enjoyed listening to Joan Jett and the Blackhearts and The Lumineers. The artwork and board shapers were very cool to see, and the surfers were great!